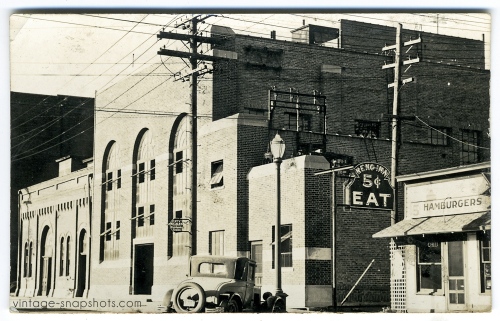 This photo is dated August 1937 on the stamp on the rear – the year the Great Depression deepened after actually having eased somewhat in the previous few years. By the following year unemployment would hit 19%. I don’t know if five cents was a great deal back then for what they were offering, but I would imagine it must have been a pretty good price or they would not have featured it so prominently. In any case I like the directness of the sign: what else, really, did you need to know?

Apart from that, though, the photo is just pretty stunning for a snapshot, I think: the lines, the angle, the light, the lone automobile, the hulking building looming over the hamburger stand, and where the 5-cent sign ended up being placed compositionally. But was the photographer perhaps actually making a photo of the large building, and the corner of the diner just ended up getting in the way?